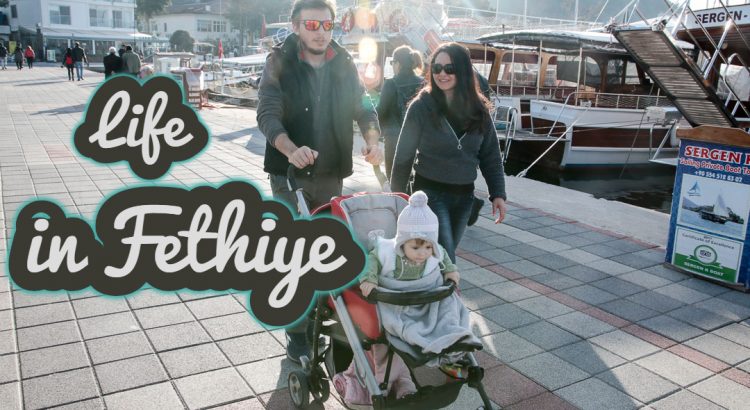 It’s been two months since we randomly picked and moved to Fethiye. It’s been two months and we’re already getting ready to roll up our sleeves to pack once again. This time we truly had better intentions. We really did intend to stay longer in this warm and mild part of my home country full of natural beauty. And yet here we are.

Who knows if this inability to stay still is due to being a Sagittarius, or whether the universe is nudging us to keep moving. But we realize the time has come to say “stop”. Hold it universe! Put a stop to this life out of a suitcase on these never-ending roads, allow this human to follow the crowd and make a home, maybe even buy a few kitchen ornaments and a bath mat like the rest of them!

What bureaucratic obstacles are in the way again? Why is it that we can’t seem to stay in our own country? Read on here.

My first impression was that there seemed to be a strangely higher number of Istanbulians as opposed to locals. Initially, it caused me a great amount of excitement to hear people say “we’re from istanbul”, where I’d jump with joy and proudly announce “Reallyyyyy? We’ve also lived in Istanbul!”. But soon after realization kicked in that four out of five people were from Istanbul, making it such a common thing that it should have caused more excitement to meet a true local. It also shed some light on the “so what” looks I used to mistake for bittersweet reminiscence of a hometown far away.

The climate in Fethiye

The climate, which was the main reason we wanted to move to Fethiye, certainly did not disappoint. The winter clothes we used to pile on in October in Italy were not even taken out of storage here in December. Not only did we gladly ignore our winter coats, boots, scarves and beanies, but we even had the joy of splashing around in the pool and sea in November!

We also took not-so-secret pleasure in sending sun-filled photos to make our friends in Italy green with envy!

Including our neighbourhood, two out of every three people we come across on the street seem to be British. While I realized before we moved here that there was a large number of Brits living in Fethiye, I’d never realized quite how many I’d run into on a daily basis – it’s like living in a summery little Britain!

It seems that, instead of passing their days cooped up inside, the Brits get their pensions, kiss their children and grandchildren goodbye and hop on a plane to make the most of their retirement enjoying the delightful weather, lush nature and local delicacies in Fethiye. To give you a better idea of the local vs expat ratio, one day, at a cafe we visit regularly, there were six couples inside, of only two people were Turkish, which were myself and another lady married to a Brit. Yes, you read right, there were TWO of us, and what a nice feeling it was to have a compatriot in the same space!

Obviously we need to talk about the traffic. I’m not sure if it’s simply because I hadn’t been home in two years but you would think that people get their licenses from a grocery store – on discount! And I’m not even talking about people riding their motorbikes without a helmet on or the Indian style four-people-on-a-tiny-moped situation. I’m talking about people indicating to go left, only to then overtake you and speed like the devil himself is chasing them. Do they have a dying wish or are they invincible? We’ve lost count of how many accidents our experienced, cool and collected Italian driver narrowly missed, and while we’ve been lucky so far, all it takes is a matter of one careless moment for that to change – which makes me think and count my lucky stars that we didn’t come here in the middle of the hot peak season…

To be a baby in Fethiye

I ask my readers with the inexperience of a first-time mother. Is it all over Turkey that random passers-by find it perfectly acceptable to touch, kiss, take photos of and scoop up your baby? Or is that perhaps a custom indigenous to Fethiye?

Without delving into this one too much, I invite you to debate this matter in the comment section below.

How small is Fethiye really?

Fethiye is a borough, with parks that families with children or people who like sports can visit, neither tiny and boring like a village, nor suffocating like a metropolitan city. In fact, one might call it a borough dressed as a city. It has the great feature of a bicycle path along the entire coast and it’s easy enough to cycle everywhere. Therefore, it’s also very common to see electric bicycles that resemble mopeds as well as ladies riding mopeds. With the convenience of living in a city built by the coast, it really is enjoyable to take a walk along the coast and rid yourself of the day’s stress with a cup of tea while you watch the lazy ripples in the water.

Fethiye is the ideal place where you can feed on pure air and let yourself loose with a range of sports activities from paragliding to rafting. However, Fethiye might not be the most satisfying place for those who take pleasure in a different type of activity: shopping. With just one shopping mall in the entire district, unfortunately the selection of famous brands are quite limited, which might be a dealbreaker for some.

All in all, while this may not be the right time for us to make it in Fethiye, it will certainly be on the cards for the future – after all, there’s got to be a reason that all those Istanbulians and Britons choose to pack up their lives and make Fethiye their new home!

Compared to Istanbul, Fethiye is pretty economical, which must be one of the reasons behind the number of people flocking here. A cup of tea is around 2TL, and sometimes even 1TL. While you can easily get a wrap and ayran (Turkish yogurt drink) for 10TL in central Fethiye, you could get a pretty decent and filling meal for as little as 20TL. Or you could go for Fethiye’s famous flatbread (pide) which is around 15TL.

You can enjoy scrumptious meals with stunning views of the sea and the islands in one of the many sea-front restaurants and cafes.

And if you wanted to rent a property, you could get a quite decent apartment for around 1,000TL per month. In fact, one could go a bit further out of the town center and find apartments for as little as 600TL per month. Despite the increase in property prices in the past few years, renting in Fethiye is still a big attraction for those who don’t want to spend a fortune each month.

The perfect place to live during winter months, Fethiye is a cozy sanctuary for those looking to get away from the hustle and bustle of city life.

It’s not a coincidence Fethiye has been chosen by a lot of foreigners and Istanbullers as a recidence place.

This time we couldn’t but we will meet again there in Fethiye!

Read it later! Pin it! 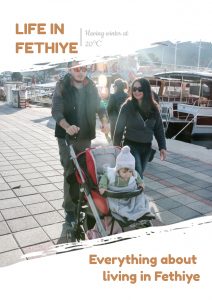